Come and Get Your Dandelion Extract Here

How our Dandelion Extract Differs
1. Select pharmaceutical grade high-quality raw material (dandelion herb with root) to extract, no pests, no mold, no scrap.
2. Clear spot identification by thin-layer chromatography to ensure the source of raw materials.
3. Ingredients contained are from the herb itself, no exogenous flavonoids added.
4. Dandelion Root Extract is available upon Customers’ request.

1. Varieties of Dandelion
The dandelions included in the 2015 Chinese Pharmacopoeia are dried whole grasses (herbs with root) of the perennial herbaceous plants T.mongolicum Hand.-Mazz., T.sinicumKitag. of the Asteraceae family (Taraxacumspp.), or several plants of the same genus. There are more than 2000 species of dandelions in the world, 70 species and 1 variety in China, of which T.mongolicum Hand is the most widely distributed in China, except for the southeast and south, it is found almost all over the country. And Taraxacum officinale is mainly found in Xinjiang.

According to research, the chemical composition of dandelion includes dandelion sterols, dandelion bitterin, lignans, saponins, chlorogenic acid, choline, inulin, inositol, and so on. Dandelion is also rich in vitamins and trace elements, and its content is several to dozens of times higher than that of common vegetables (such as tomatoes, cabbage, and carrots). In recent years, with in-depth research on the development and utilization value of dandelion, it has been developed into health care products, drugs, and cosmetics. It is widely used in pharma, food, health food and so on.

In addition, Dandelion has the characteristics of non-toxic, mild, and high safety, which has been verified by the long-term application practice and pharmacological and clinical research in China.

2. Bioactivity of Dandelion
Antibacterial and antioxidant are the two main activities of dandelion.
2.1 Antibacterial.
The whole dandelion grass contains triterpenoid components and flavonoid glycosides, which has a broad-spectrum antibacterial effect, and has obvious inhibitory effects on common bacteria such as Staphylococcus aureus and Pseudomonas aeruginosa. A large number of studies have confirmed that dandelion is effective against Gram-positive bacteria, Gram-negative bacteria, and fungi and does not produce drug resistance.

2.2 Scavenging free radicals, antioxidant. Flavonoids are one of the main active ingredients of dandelion, and have SOD-like effects.
As shown in a set of experiments in the figure, dandelion flavonoids have a strong scavenging ability for hydroxyl radicals, and the scavenging ability increases with the increase of flavonoid content. And with the dandelion flavonoids mass concentration reaching a certain amount, its scavenging capacity for hydroxyl radicals tended to be gentle without significant changes. 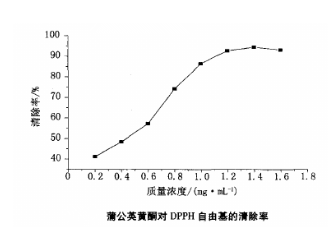 2.3 Dandelion has a strong antibacterial and anti-inflammatory effect. Dandelion's SOD-like small molecules can stimulate the enhancement of the skin's endogenous SOD activity. At the same time, they can directly participate in the removal of free radicals, improving skin free radical metabolism, reducing the stimulation and inflammation of free radicals on skin tissue. 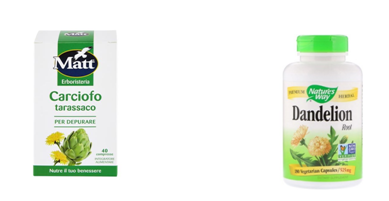 3.2. Food industry. Dandelion is rich in nutrients, protein, various mineralsm, and trace elements, vitamins, it has been widely used in food, beverages, and other fields. The activity of dandelion flavonoids is stronger than rutin, quercetin, etc. with strong antioxidant activity, it can be developed as a food additive for food antioxidants and extended shelf life. 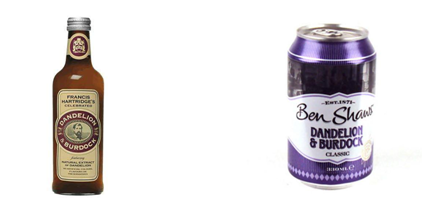 3.3. Cosmetics. The effective active ingredient of dandelion extract has a SOD-like effect, which can quickly remove free radicals. It is rich in antioxidant substances and antioxidant lipids with strong antioxidant capacity. What’s more, it has antibacterial and anti-inflammatory effects and is a natural bacteriostatic agent. Dandelion extract can be used in facial cleansers, shower gel, cream, etc. for acne and freckles.

3.4. Feed. Dandelion is known as "natural antibiotic" and has a high feeding value. The dandelion feed is popular among livestock and poultry breeders because of its wide resources, non-toxic safety, and no drug resistance. 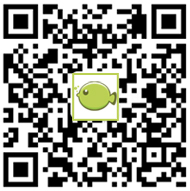